A class of its own – Frikadelli Racing team 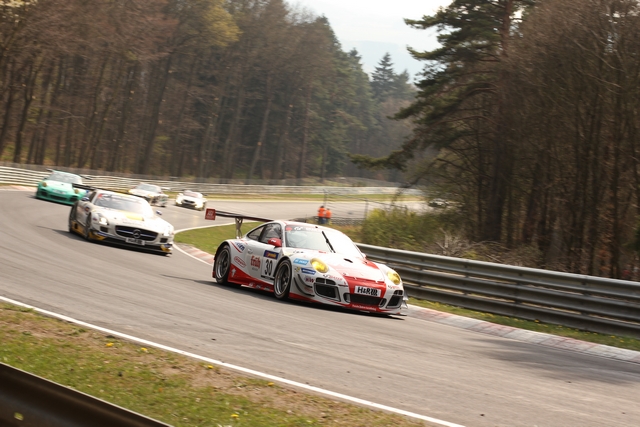 The overall victory for the Frikadelli-Racing Team and the achievement of a save arrival for all three vehicles during nice weather in the Eifel was cause for sensation. Despite all that the race was anything but boring and the drive to victory downright spectacular.

The Porsche- factory driver Patrick Pilet (France) wanted to get hold of the pole position from the early morning on to get the best possible spot for the 39. DMV 4-hour-race. He was appointed as the fourth driver – to get used to the Porsche 911 GT3 R for the 24hours race – and shared the vehicle with the regular drivers at this weekend. As the first driver on the track he had contrary to his last race a “clear run” and was able to achieve with an 8:08.001 an excellent time which lasted for a long time as the best starting position. But at the end of training the times gained speed and the red-white Porsche earned a good 5th place. 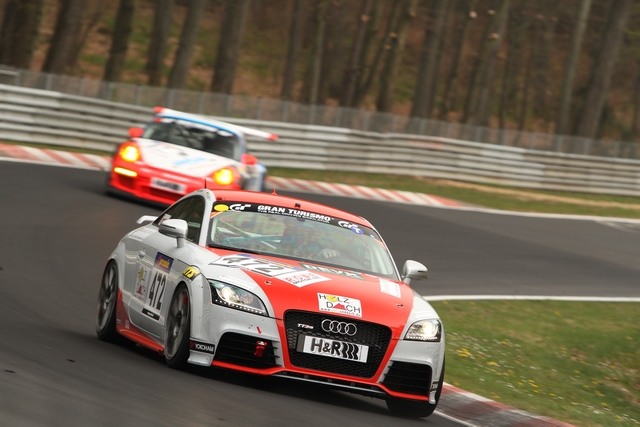 Right from the start Patrick Huisman (Netherlands) pressed hard and tried his best to find a way past the opposing vehicles. As he turned towards the Nordschleife he already achieved the third place. At the old Nordschleife the pursuit race gained speed and Huisman could hold his ground against the two cars in front of him due to his skilful manoeuvring. From this moment forth the fastest meatball of the world seemed to be unleashed and broke away from the rest of the field – together with the Mercedes SLS from ROWE Racing. The ROWE SLS was able to counterattack in round five but the frantic Dutchman could catch him again. The advantage on the rest of the field would have continued to rise if the red flag hadn’t interrupted the race temporary.

The restart was done by Porsche- company driver Patrick Pilet. The young Frenchman initially held his position and gained a respectable distance to the rest of the field. In this phase of the race fierce duels between vehicles of the chase group behind the Frikadelli team resulted in an undisturbed progress for the Porsche team. Only the Audi from PHOENIX RACING was able to gain some time due to an advanced pit stop and to gain the lead against the Friko- Porsche – at least in a visual sense. In addition to the first part of the race the private team from Barweiler was considerably in the lead and an overjoyed overall winner.

The Cayman team of Janine Hill, Jon Shoffner (both USA) and Anthony Ashley (South Africa) was likewise contented. With 21 starters the V6 class was extremely good manned and the team was happy about the sixth fastest time at the V6 training. The little Porsche was again absolutely reliable and reached the finish line without a scratch. Due to a protest in the class the final placing is still undisclosed. 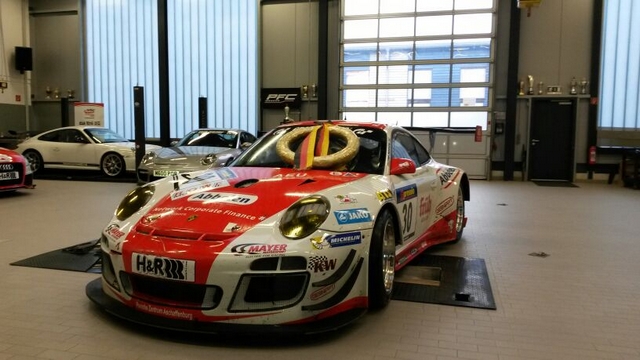 The new Audi TTRS was put to the test for the first time. The trio Thomas Leyherr (Dillingen), Marcel Belka (Lehrte) and Tom Moran (Munich) was able to gain first experiences with the vehicle and brought the car across the finish line without a scratch. At the end the class victory was achieved which enhanced the overall result of the Frikadelli- Racing team once more.

Team manager Erik Meyer confirmed: “We achieved a top result. All three cars reached the finish line; of these we earned an overall victory and a class victory. My heartfelt thanks go to the entire team, because everyone did a superb job.”