Brilliant performance at the 24h race by the Frikadelli-Racing Team

The Frikadelli Racing team left the Nürburgring after the race on Sunday with mixed feelings. After an extreme impressing performance until nightfall – were an overall victory was within the teams grasp – the tide was turning and in the end two other vehicles were able to reach for the trophy. 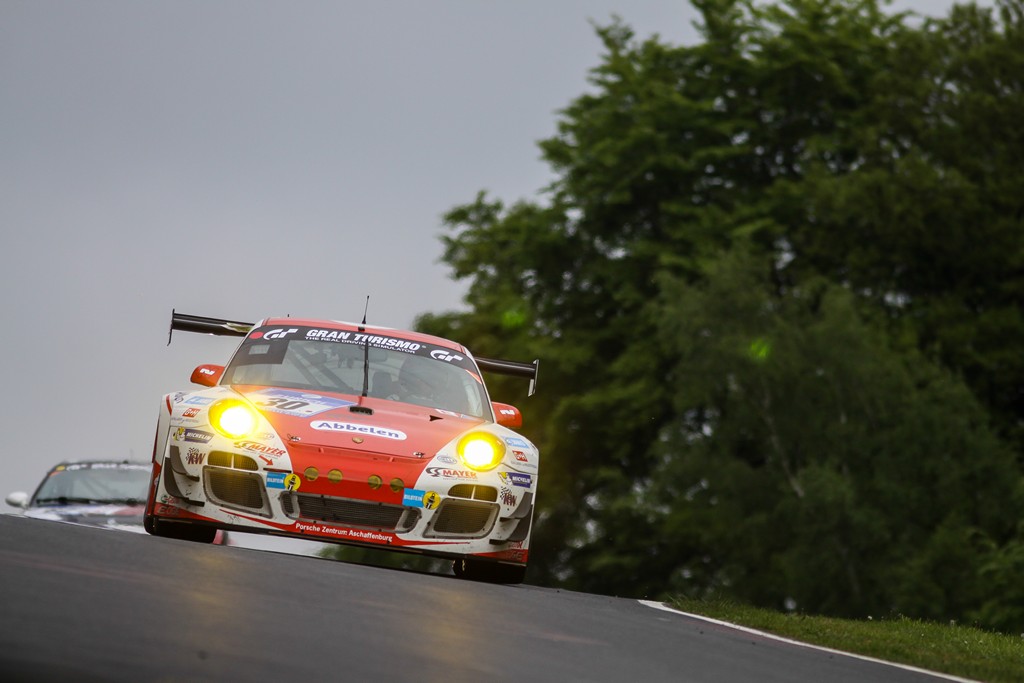 What the 24h race was able to offer this year was more than impressing. Never before the competition was so strong and so well casted. Especially the factory- teams were determined to use sometimes entirely new vehicles and the cast of drivers made the hearts of the fans take a leap of joy. The local Porsche team held up the flag of Stuttgart and was humble from the beginning. “If we achieve a position in the top 10 we’re really satisfied,” attested Klaus Abbelen right before the start. How seriously he took this goal was reflected by the cast of drivers. He gave up his own place in the fastest meatball of the world and relinquished the cockpit to his life companion Sabine Schmitz (Barweiler), Patrick Huisman (Netherlands) and the two Porsche factory drivers Patrick Pilet (France) and Jörg Bergmeister (Langenfeld). 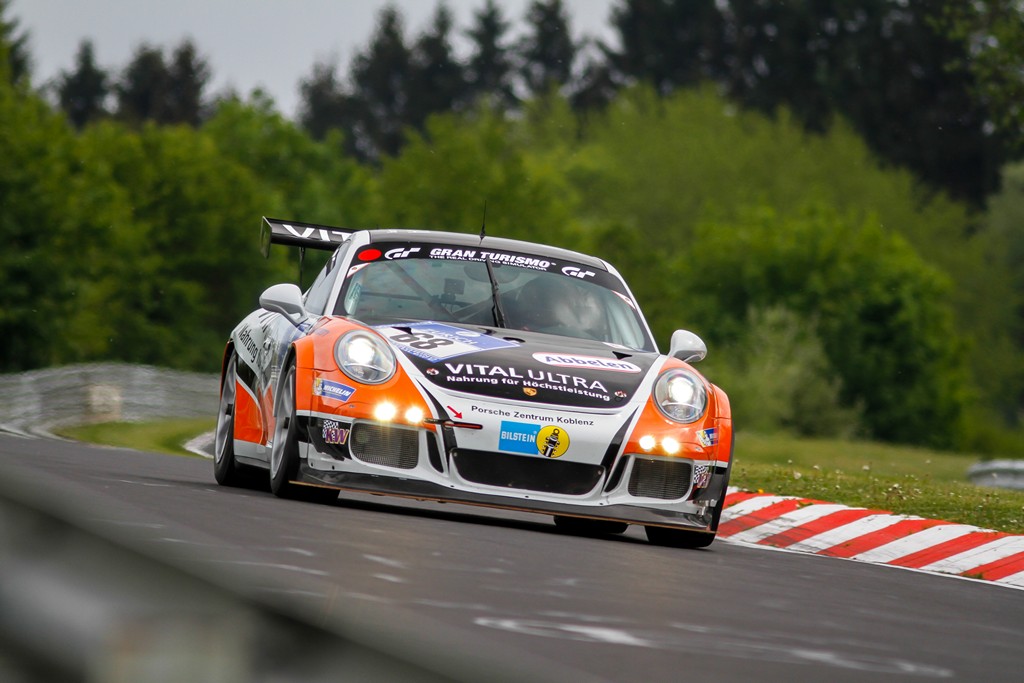 But Klaus Abblen wasn’t idle at all. He took over the wheel of the Porsche 911 GT America at the SP7 class. In addition to him the customer- vehicle, placed by the Frikadellis, was driven by Frank Kräling (Winterberg), Marc Gindorf (Monaco) and the Porsche junior Connor de Philippi (USA). The Renault Clio was the third car which was placed at the SP3 class. It was piloted by an consolidation of the well known Frikadelli pilots John Shoffner, Janine Hill (both USA), Thomas Leyherr (Dillingen) and Herbert von Danwitz (Tönisvorst).

Despite the rather low expectations Patrick Pilet was able to achieve a good 14th starting position with the GT3 R and showed the audience what the car was capable of. Once again the race started as a sprint- race and the big factories showed their strength. Patrick could hold up the speed at the beginning but the sudden rain challenged the Frikadellis. During two laps the Porsche went from the 13th to the 5th position and it didn’t took much longer until the team was able to gain the overall lead. From now on the vehicle was a permanent part of the top 3. The local team dominated almost the entire race and achieved a comfortable lead towards the competition at dark. But at about 23h a new shower of rain occurred which made the conditions at the challenging Nordschleife even harder. On the way to the track section ‘Hohe Acht’ the Porsche collided with another car and hit the barrier pretty hard. After this the vehicle was too badly damaged to continue and consequently all hopes for an overall victory were destroyed. 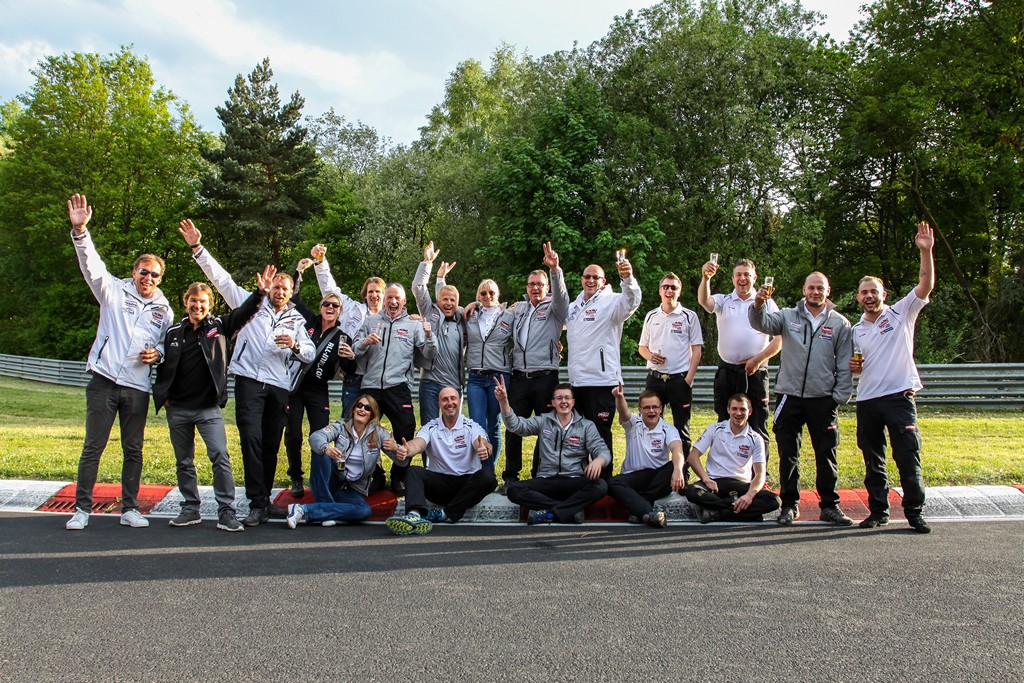 A bit later that night the GT America nearly suffered a similar fate. Only for a short time the car came onto the gravel and slided directly into the armcor – which resulted in a damage of the front- and tail. The wrecked car was able to get back to the box on its own and could join the race after a perfectly executed repair within only 21 minutes. What an enormous achievement this was reflected the finish: despite the accident the team earned the second place at the SP7 class and the 19th position at the overall ranking.

Even for the Clio the race didn’t went as planned. A trip on a smear of oil and two unscheduled breaks due to technical difficulties resulted in an shortage of three hours driving time for the little Frenchmen. However the work of the pit crew was unblemished and the Clio was able to reach the finish line without help. It is also notable that for three of the four drivers this was the first time at the 24h race at the Nürburgring.

If the team is be able to repair the highly damaged Frikadelli Porsche will be decided in the coming days. Howsoever when the next VLN run at the Nürburgring will proceed the whole team will be present.