At the 40th anniversary edition of the ADAC 24 hour race, it was lots going on for the team of Frikadelli racing. A sixth place overall, the best Porsche in the field, the most successful private team and the fastest woman could be recorded at the end. But things step by step. 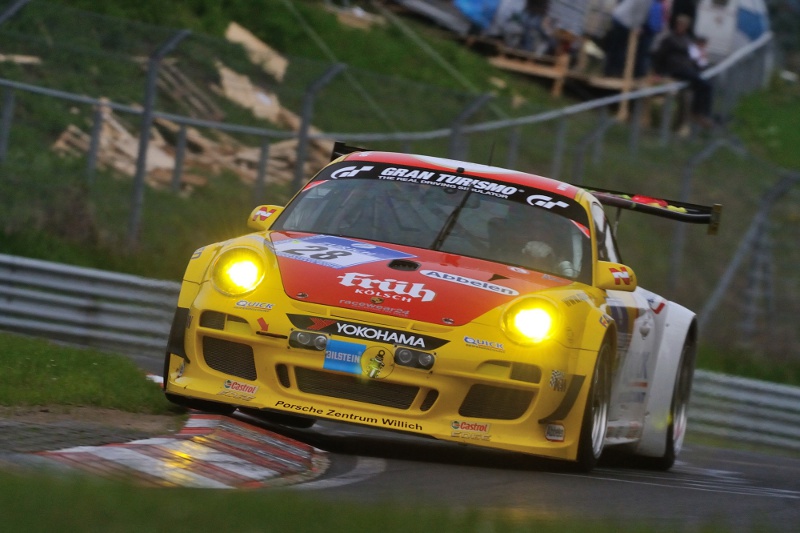 The race for the Porsche team already began on the Wednesday before the race. Because once again the team wanted to greet the fans around the Nordschleife personally with the tractor. Who knows the Frikadellis know that there are not doing half things. With music and lots of Frueh Koelsch on board the tour could keep on going until late in the evening.

On Thursday the first practice starts in a good mood. Because of the qualify in advance for the Top40, held for the first time this year, team manager Frank Lynn would take no risk. The opportunity was used for some final tuning work, the driver Abbelen Klaus, Sabine Schmitz (Both Barweiler), Patrick Huisman (Enschede) and Christopher Brück (Cologne) reeled off their mandatory laps. Also the second qualifying session went smoothly, so that they could now concentrate on the long-awaited Time Trial.

Christopher Brueck, who was already great on the VLN for top times, should do those 2 fast laps. The first round was quite promising, but the team manager Klaus Abbelen was sure that the car is good for a even better time. But that better time didn´t happen as Christopher complained after a short time, that the tire choice was not perfect and reduce seemed relatively quickly. This was the 21st start position for Frikadelli Racing and the car could get perfectly set up rolled to the starting line.

The launch took place punctually at 4pm, and the cars were released on the now well-attended Nordschleife. From the first moment it was clear that it this edition of the 24h race is a pure sprint race because every vehicle of the class SP9 did well directly from the start and did let their muscles play. Starting driver Patrick Huisman did very well, stayed away from dangerous duels and stayed on speed properly. After a few hours, the red-yellow-white Porsche had made some good positions forward and reeled off his rounds quickly and easily. Even before nightfall all four drivers, the had been behind the steering wheel at least once and after 12 hours position 13 was secured.

So it could go on for Frikadellis, yet nobody knew what had to be endured for a war of nerves. The beginning of it was the rain was in the morning, the pocker game which tires to use started. After a brief assessment of the situation, the team gambled and so Sabine Schmitz went with intermediates back on the track, which quickly turned out as a mistake. "This fault did cost us 4 minutes per lap," so the Speedbee later. With the change to wet tires, the Porsche was back on the race. 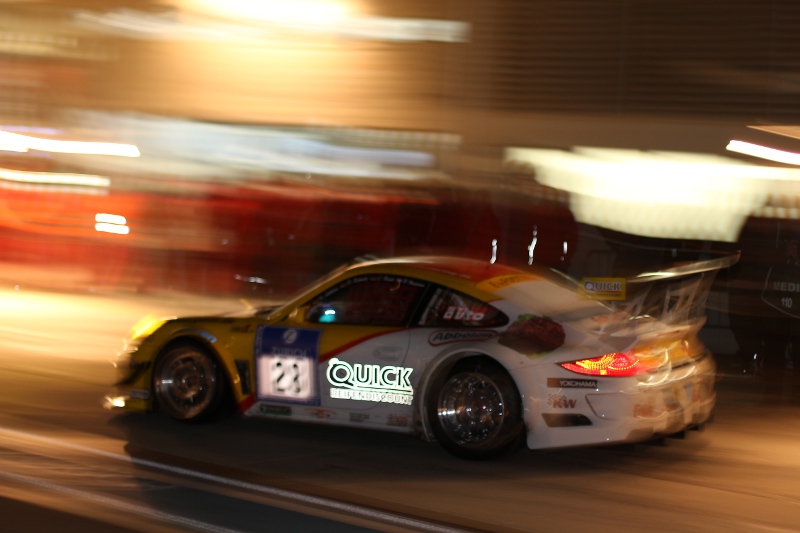 Because of the smooth ride and the speedy pit stops the porsche made it forward in the morning hours up to the 8th position and made its laps without a scratch. This should also stay for a while, until around lunchtime the Frikadellis got also hit by the puncture-devil: Patrick Huisman made it with the damaged tire into the pits, without a significant loss of time. This opportunity was used to make a driver change and so Christopher went back out on the track. But it took only a single round, until Chris called from the track: "Damage at the right rear tire, I think that's it, the car just solves itself complete!"

As a blessing in disguise could be called that Chris was still on the Grand Prix track that time and manged drag the heavily damaged car even without a passenger door into the pits. The pit crew tapted in a rush the rubble at the rear, the tires were changed again, the car got send onto the track again. But once the driver from cologne had to come back to the pits to get the quick organized passenger door fixed to escape a sport fine.

These three unscheduled pit stops put the team back to the 8th Position and from now on, everybody in the box fever in front of the monitors as they may could carry the car just because of watching through the finish line. By an eventful last quarter of an hour, and therefore associated driver failures Patrick Huisman was eventually waved down. The reward for the effort was an outstanding sixth space and the knowledge that team boss Klaus Abbelen would provite necessary things for the party at the end. Thus, the team said good by with the intention to be back in the first positions in the next edition of the 24h race. 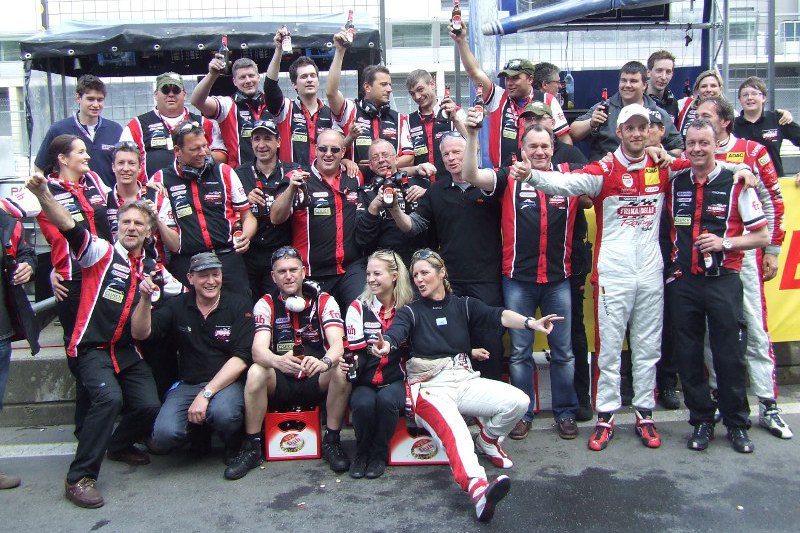