Frikadelli racing team has long been an institution at the Nurburgring. Whether in the VLN races, or at the annual 24-hour race, the team from Barweiler is always one of the party. They always rely on vehicles of the sports car manufacturer from Zuffenhausen, which is in the current season, a Porsche GT3 R in the class SP9 for FIA GT3 cars. The car has to team and fans the title of "probably the fastest meatball in the world," named after the nickname of meat manufacturer Klaus Abbelen, “Frikadelli” who brought the successful team into life.. 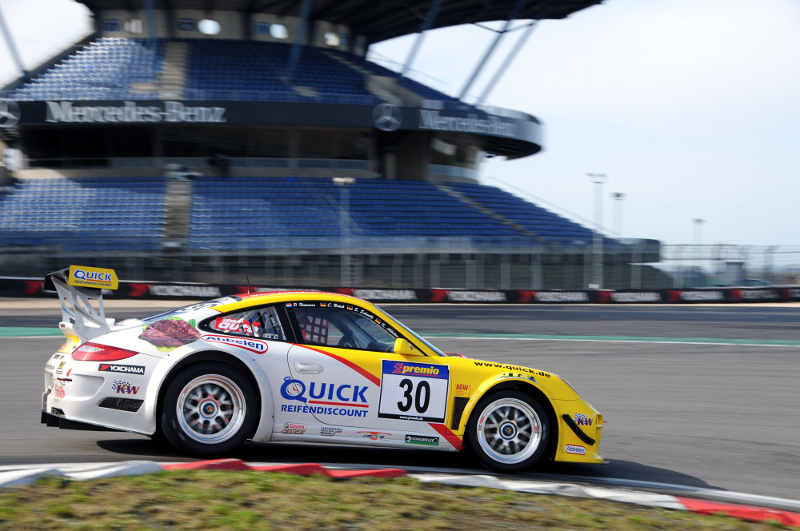 Klaus has a long motor racing career behind him, which began in 1979 in motorcycle racing. After some successes, and league titles in various GT series 2005 the foundation for today's Frikadelli Racing team got started. His ambition has always been to connect fun and friendship in the team with professional motor sports involvement.

Hard by his side since the beginning is his partner Sabine Schmitz. The native Nürburgerin is known as "Speedbee" to all ring fans for years and was the first woman ever had two overall victories in 24 races and a victory of a VLN championship. The "Queen of the Ring" likes to challenge her male colleagues and could collect therefore some podium positions in the last few years during VLN.

In addition to this couple,Christopher Brück is the perfect counterpart. With his 27 years the talented guy from cologne is almost the youngster in the team. That he is not missing any experience or professionalism, gets proofed by his motorsport career. In addition to many Formula Series Christopher could gain experience on cars like the Mercedes SLS AMG, with that he started last year in the ADAC GT Masters. "Chris" has drawn attention to himself this season, especially by accurate, fast times in the practise laps which caused in the current VLN season already several start positions in the Top 10.

Since this year is also Patrick Huisman is on board of the team. The fast Dutchman has always been driven Porsche sport cars and so had no problems at all to get along on the “meatball”. In addition to numerous class wins and successful participation in various GT cars, he won several times the 24 hour race at Zolder, and was early in his career Dutch touring car champion. But above all, his 4 Porsche Supercup title are an impressive testament to his skills.
Together, the quartet of the drivers and the team of around 15 mechanics has high goals for the 24h race 2012 at Nurburgring. According to a 9th place overall the last year and the 3rd Place in 2008, it should go this year all the way forward.