Hot race and the cold Ring 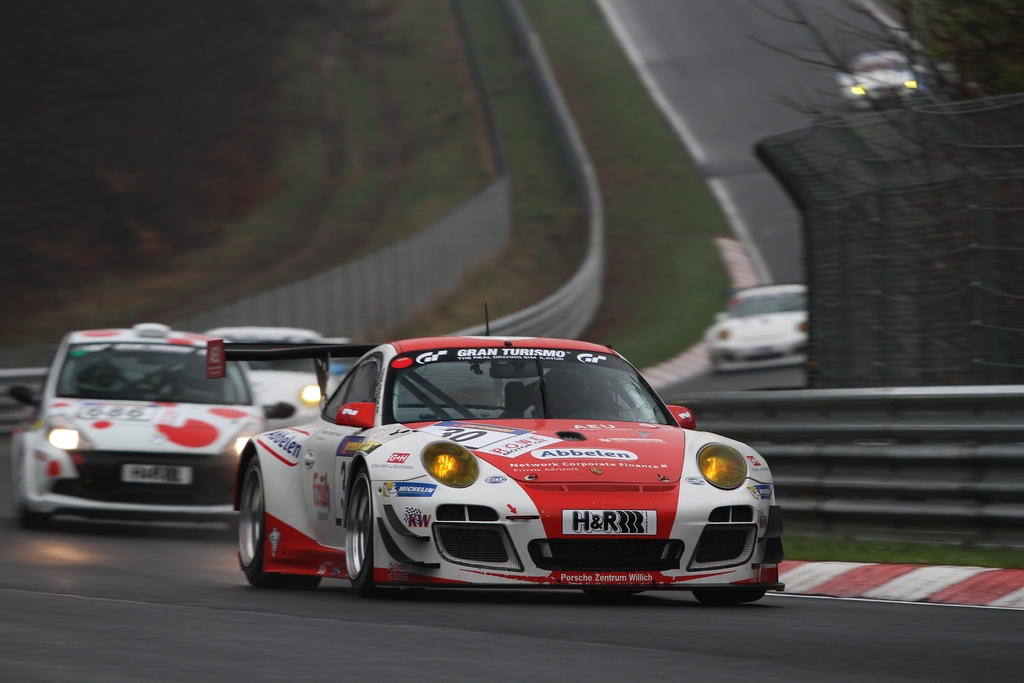 The 55. ADAC ACAS H&R Cup should be the last dress rehearsal for the 24h- Race. After a sublime kick-off in the last race with an unindebted dropping out the Frikadelli- Racing Team from Barweiler wanted to build on the powerful performance and to excel itself with a good result. The omens were favourable – after all the racing car was completely repaired and the driver pairings were interesting chosen. Teamowner Klaus Abbelen stand back for the race and left his place to company driver Patrick Pilet (France), who was called into action for the team for the first time. Additionally Klaus Abbelen relied on familiar faces: besides Sabine Schmitz (Barweiler) Patrick Huisman (Netherlands) was nominated.

The conditions at the morning qualifying anything but perfect. After some pleasant spring days over the week the weather showed its unfriendly side. The temperature was winterly cold and besides steady rain heavy fog patches drew up around the Nürburg. It wasn’t an easy task for the team manager Frank Lynn to find a working setup with the drivers. Since empirical values for the new car under these conditions were missing the exact parameters for tyre pressure and suspension set-up still had to be found. Indeed all drivers could complete their obligatory laps but the result with the twentieth start position was disappointing. But the private Porsche team is known for its ambition and wasn’t discouraged.

Works driver Patrick Pilet didn’t have an easy task since he ought to take the start. Due to the unfavourable weather conditions the officials decided to start the race with two formation laps to give the drivers the chance to get acquainted with the wed track and the bad vision. The spectators witnessed an eerie scene at the track as over 200 cars only could be seen due to their headlights. The friendly Frenchman wasn’t impressed and kept track of the start. Apparently he was soon familiar with his new working place and added to the pressure to the leading competition from the beginning. He improved his position lap after lap and pushed the fastest meatball of the world place by place higher at the ranking. Already in the second flying lap he had worked up his way to the twelfth position and delivered the car to Sabine Schmitz in the tenth lap. 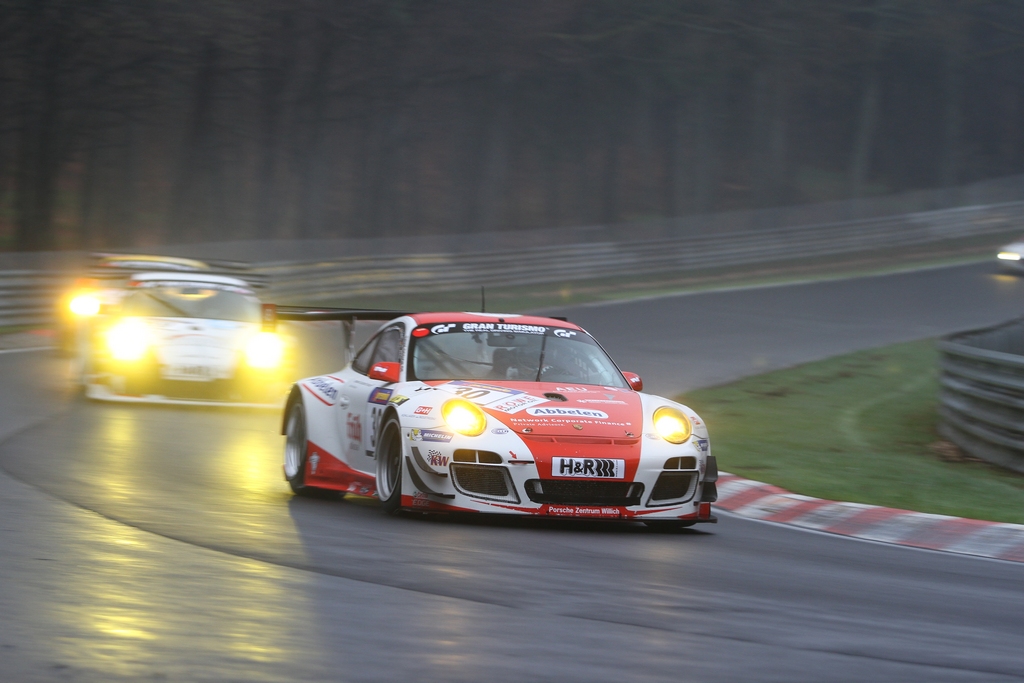 While there have been some difficulties with the new fuel regulations during the last race the Barweiler Team could now show their skills again. With a perfect pit stop the native woman from Nürburg could go back to the stretch within the allowed time. But despite the sublime build-up of Pilet her task wasn’t easier at all. Already after a short time it was obvious that the intermitted rain changed the track conditions rapidly. While rain tires had been the only possibility for the first stint the tires constantly lost their durability on the now drying passages and cost precious lap time. The soon upcoming change to the plain slick tyre was delayed as far as possible – which should proof itself as a clever gambit during the remaining race. The team aimed to lose as little time as possible by staying on the track as long as possible with the worsening tires to avoid an additional refueling stop. Using this maneuver the native woman from Nürburg lost a few positions which was accepted.

In the sixteenth lap the longed for pit stop finally arrived and besides a change of tires Patrick Huisman took the place as driver. The Dutchman was able to gather speed and started a brilliant comeback from the thirteenth position. From now on the Porsche team from Barweiler displayed its full potential and with an extreme low lap time the driver improved his position lap by lap. The comeback should be successful – in the twentieth lap the Flying Dutchman fought his way up to the fifth position. In this lap the fastest meatball in the world encountered a rival of a befriended Porsche team and so a true battle for the fourth place set off. But while the two racing cars from Zuffenhausen didn’t give any quarter and speeded through the forests bumper on bumper the danger approached from behind in form of a fast Aston Martin. In front of the captivated audience of the Grand Prix track a fascinating fight between the three opponents began. While the Aston Martin turned the race to his favour for a short time the two Porsches benefited from a driving error and with only a few centimeters distance the makes from Stuttgart made it for their last lap over to the Nordschleife. Eventually Patrick Huisman had the last laugh and secured the fourth place for the Frikadelli- racing team at the last lap. All in all, the entire team was very happy with the result, Klaus Abbelen attested after the race. On Sunday after the race the car was disassembled into its individual components, in preparation for the 24 hour race