The early meatball catches the worm! 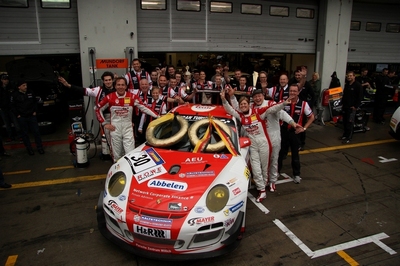 For the last time this year the VLN invited the spectators to the Nürburgring to stage the final run of the long-distance championship. Of course the Frikadelli- Racing team from Barweiler consisting of the very promising driver combination of Klaus Abbelen, Sabine Schmitz (both Barweiler), Patrick Huisman (Netherlands) and Henri Moser (Switzerland) wanted to display their talents one more time.

Already in the morning it appeared that the race would probably be decided by the right tyre choice. Precisely here the team have had bad luck at the last races and considered the situation as a special challenge. Patrick Huisman should start from the fourth position which was a challenge for the experienced Porsche-driver. In comparison to most other competitors the team decided to take high risks and not to start – like most of the other teams did – with rain tyres. So from the beginning Patrick not only had to fight against a once again fierce competition but also against the slippery track. But Patrick defended his fourth position in the demanding starting-phase with partially artful drift stunts.
On the increasingly drying track it became apparent that the tyre choice of the Frikadellis was genius. While most drivers were looking for puddles of water at the edge of the track to cool their tyres the red- white Porsche gained momentum and picked up speed lap after lap. Already in round 3 Patrick took the first position and didn’t gave it away until the scheduled pit- stop after 7th lap. 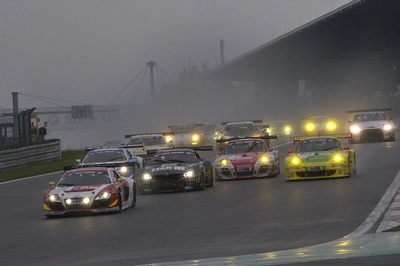 But Sabine was unable to rest on her laurels. The track had become a dangerous place due to accidents and the resulting fluids on the track. The fastest lady of the ring had to fight against partly congested traffic which she mastered brilliantly. Henri and Klaus could handle the difficult task with surprising ease as well. Without a single driving error or a collision with another car they flew the car through the autumnally woods of the Eifel and in the direction to the next podium.
Due to the once again very sophisticated tactic the fastest meatball of the world was driving as the last vehicle of the GT class with the biggest displacement to the box – which made it impossible to tell which position the team hold during the whole race. But the plan of the strategists worked again and at the end of the race the Porsche was driving over the finish line as runner-up for the third time in a row. 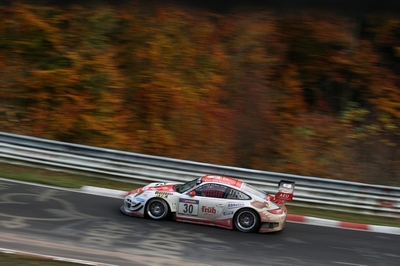 Thus the private team’s most successful year since its existence ended. In this year the team won besides the first overall win the most places on the podium. Due to this the team was awarded the “VLN Speed Trophy” – the reward for the most successful team in the vast SP9 class of the VLN- series. The end of the season was celebrated by the Frikadellis in their typical manner: together with friends, fans and partners the party at the home town Barweiler lasted until the wee hours. But this is not the final parting of the private team before the winter break – on the 7th December 2013 the yearly charity Christmas fair of the teams own workshop will taking place and the team is looking forward to see as many visitors as possible for a good cause.